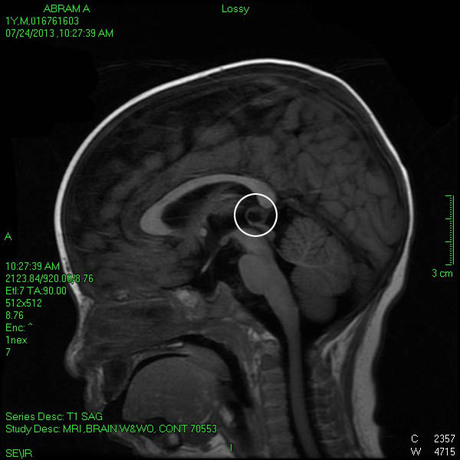 **UPDATE: AS OF SEPTEMBER 2016, OUR SON'S PINEAL CYST IS CONSIDERED "STABLE". OUR NEUROSURGEONS AND MAYO CLINIC IN ROCHESTER, MN HAVE ASSURED US THAT IT IS *NOT* A TUMOR AND THAT FOR NOW, WE CAN DISCONTINUE THE SCANS. BRAIN SURGERY HAS HIGHER RISKS THAN THE BENEFITS OF REMOVING A MASS LIKE THIS DUE TO HOW DEEP THIS IS IN THE BRAIN. WE HAVE BEEN INFORMED OF WHAT SIDE EFFECTS TO LOOK OUT FOR - INCLUDING HYDROCEPHALUS AND PARINAUD SYNDROME. WE WERE TOLD THAT IT MAY CAUSE HIM ISSUES LATER IN LIFE - WHICH WE WILL DEAL WITH WHEN/IF THAT TIME COMES. FOR NOW, WE DO NOT HAVE TO CONTINUE TO SCAN THIS EVERY YEAR AND IT CAME AS A RELIEF TO BE ABLE TO SCRATCH ONE THING OFF OF OUR LIST - AS OUR SON HAS A PLETHORA OF OTHER HEALTH CONDITIONS TO FOCUS ON. I'M KEEPING MY ORIGINAL ENTRY BELOW - SO PEOPLE CAN READ/LEARN ABOUT THEM AND FIND THE HELP THAT THEY NEED.

IF YOU OR YOUR CHILD HAS A PINEAL CYST THAT IS SYMPTOMATIC, I URGE YOU TO CALL DR. KIM IN HOUSTON, TX AS A GREAT DEAL OF MY FRIENDS WITH OLDER CHILDREN HAVE HAD GREAT SUCCESS WITH PINEAL CYST SURGERY WHEN THE SYMPTOMS BECAME TO GREAT TO HANDLE.


**Please Note: The information herein is based on my own opinion and the research that I have done. I am not a doctor. I am just a very concerned mama on a mission to help her baby.**

When I first heard that my son had a "Cystic Lesion of the Pineal Gland" (aka pineal cyst, aka benign pineal tumor), I had no idea what to think. I rushed right to my son's Neurologist's office and had him explain to me exactly what that meant. When he showed me a diagram of the brain and where my son's cyst was, my stomach dropped.

The pineal gland (as you can see in the image above) is located almost in the middle of the brain in the cerebrum. The cerebrum is a vital part of the brain as it "is responsible for processing messages sent to the brain from other parts of the body and then telling the body how to respond. The cerebrum controls functions such as thinking, learning, speech, emotions and movement." and then, there within all of that important stuff sits the Pineal Gland. The Pineal Gland (sometimes referred to as "the third eye") is a small gland that is responsible for making melatonin, thus it affects wake/sleep patterns.

I had heard of the Pineal Gland before but had no idea what it's purpose was or what it meant for my son to have a Cystic Lesion in that area. As a concerned mother, I spent the following several days researching, reading and re-reading case studies about Pineal Cysts/Tumors and luckily stumbled upon a support group filled with hundreds of people who are either suffering from or whom have children who are suffering from the same issue as my son and I haven't stopped researching since.

I want people to learn what I have learned about this scary, ominous and very real thing that is happening to my family. I learned that "It can be difficult to distinguish a complicated pineal cyst from a pineocytoma" (a very rare brain tumor) and that "Because a complicated pineal cyst could look quite similar to a pineocytoma on brain imaging tests, it may not be possible to distinguish between the two by imaging only." I have also read several times over that it is very hard to tell the difference between a cyst and tumor without a biopsy. Yet sadly, a biopsy would be just as dangerous as the surgery in which to remove it.  In fact, because of the rarity of pineocytomas "there are no consensus guidelines on the best treatment" and that "because these tumors are located deep in the brain, it is important that the risks of surgery in this part of the body be carefully considered in each individual patient."

As a mother trying to process this, it seems that some doctors believe that Pineal Cysts/Benign Tumors can cause symptoms while other doctors don't believe them to be symptomatic at all - which is exactly where my frustrations lie.  When my son was diagnosed with a Cystic Lesion we were told that it was approximately 10mm (1cm) in diameter so when I read that "Larger pineal cysts are rare findings that may cause a variety of symptoms "including headaches, increased pressure on the brain (hydrocephalus) and vision abnormalities" my stomach hit rock bottom again. This especially struck home when I read the fact that "large symptomatic pineal cysts may potentially cause serious conditions such as seizures and loss of consciousness", as our son has most recently been exhibiting "seizure-like episodes" and "vision disturbances". From my reading I have discovered that cysts over 5mm (.5cm) are considered rare and "symptomatic pineal cysts generally vary in size from 7 mm to 45 mm, whereas asymptomatic pineal cysts are usually less than 10 mm in diameter, although a relationship between the cyst size and the onset of symptoms does not seem to related in most cases."

In addition, Pineal Cysts can cause several other issues including "gaze palsy, Parinaud Syndrome and vertigo" as well as the less frequent symptoms of "ataxia, motor and sensory impairment, mental and emotional disturbances, seizures, circadian rhythm disturbances, hypothalamic disfunction of precocious puberty and secondary parkinsonism." What is most frightening about the fact that our son has a Cystic Pineal Lesion is the fact that "whether patients with symptomatic pineal cysts should be monitored and/or treated is still unclear" in the medical field and the only time surgery is recommended is when the individual gets "hydrocephalus, worsening neurological symptoms, or enlargement of the cyst over time."

For our family, this means that there is literally nothing that we can do to make our son more comfortable. The only time that surgery is welcomed is when an equally life-threatening issue such as hydrocephalus sets in. In my discussion with multiple world reknown Neurosurgeons regarding Abram's specific ailments, none felt that surgery was an option because the risks of the surgery still outweigh the symptoms that our son is suffering from. However, we have been advised that the cyst will need to be dealt with at some point.... that point being when Abram shows symptoms of Parinaud's Syndrome or Hydro

I think the scariest and hardest part is the fact that in order for our son to be relieved of his issues, he will need to have invasive brain surgery. I have had a lot of people ask me why they just won't take the cyst out now before it causes more issues and at first I was really frustrated with that as well. However, you have to remember that the cyst is located in the deepest part of the brain where core functions of daily living manifest.... meaning that with one slight misstep or just one mm too far in one direction or another and my son's life could be altered forever because the cerebrum is what controls our thoughts, speech, learning, emotions and how we move which is why the doctors always reiterate that the benefits of the surgery must outweigh the risks. Unfortunately, this means that we have no way of making our son more comfortable. There is nothing that we can do to help his eyes stop moving in a way that they should not or to help him feel better, as it seems that pain medication does not work in soothing him on his fussy days. The only thing that has been suggested is supplementing with Melatonin in hopes of helping our son get more rest and with hope enable him to have more restful nights and less restless days.

Plus, just as is shown in the research that I have done - each doctor we have come into contact with believes a completely different thing than the doctor before him. We have one world-renown Brain Surgeon telling us that the cyst IS symptomatic while our local Neurologist believes that the cyst is "significant" but does not agree that it is causing his symptoms. So, we are in the process of getting a third opinion. It seems strange that these cysts are supposedly "common" but there is no general consensus on how to deal with them in the medical field and no recent studies that I can find involving Pediatric patients and symptomatic vs asymptomatic cysts. Clearly, I am not a doctor but I find all of this information maddening! How am I supposed to know what to do for my child if even the medical community cannot agree upon it?

I can't help but to wonder if the reason there are not many studies done on Symptomatic Pineal Cysts is due to the fact that Insurance Companies will not cover surgery to remove masses that are not cancerous? We know for a fact that our insurance company will not cover brain surgery if the cyst is considered "benign", while at the same time, there is no sure way of knowing if a cyst is truly benign or not without removing said cyst. It all seems like some ugly nightmare and having to jump through hoops for insurance approvals and being denied private health care due to our son's "pre-existing conditions" more than a bit disheartening and thus the reason for this website. In order for us to get the surgery done that our son will need, we will have to raise all of that money ourselves and pay for it out-of-pocket due to the fact that it is considered a "benign" brain tumor and as-of-now the surgery costs in the upwards of $300,000.

So, we are on the great roller coaster of our health care system and the scary unknown world of Cystic Pineal Lesions. I'm not sure where to leave this as I feel that I have left out an abundant amount of information here.... but this shall do for now for those who were curious about our son's ailment.
RESOURCES:
1. Neurology, Mayo Clinic, Rochester, Minn. - http://www.mayoclinic.org/medical-edge-newspaper-2012/jun-01a.html
2. Genetic and Rare Diseases Information Center - http://rarediseases.info.nih.gov/gard/10723/pineal-cyst/case/33292/case-questions
3. Genetic and Rare Diseases Information Center - http://rarediseases.info.nih.gov/gard/10723/pineal-cyst/case/26006/case-questions
4. American Association of Neurological Surgeons - Abstract: 2009 Aug 30